Athletes and fans of weightlifting alike can expect some changes to the upcoming 2022 USA Weightlifting (USAW) National Championships. This year’s competition in Las Vegas, Nevada, will serve as a trial run as USAW attempts to shake up the viewership experience at its competitions. The warm-up area will be moved forward and placed alongside the competition platform itself.

The 2022 National Championships kick off on June 25 and run through July 3, 2022  — with Youth competing for three days, Junior for three, and then Senior for three. Spectators will, for the first time, be able to witness the athletes in real-time as they prepare to take the stage for their competition lifts. 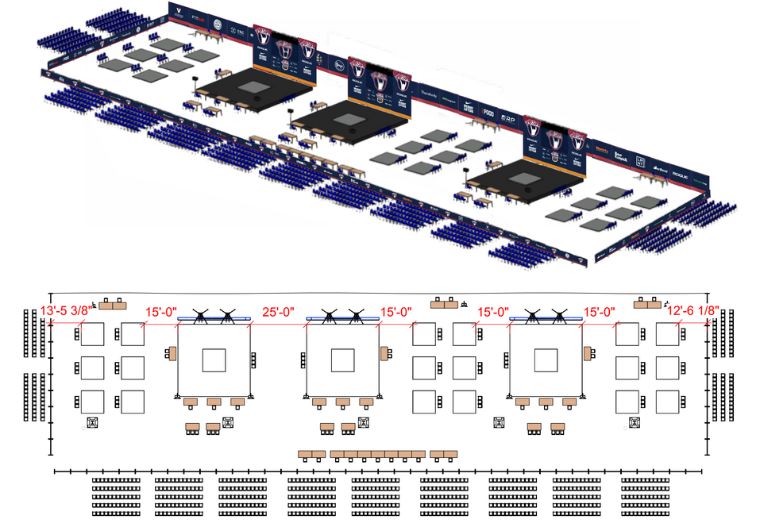 USA Weightlifting told BarBend via e-mail that the change to its floor plan is an innovation meant to "continue progressing the sport forward and create a more engaging atmosphere."

Spectators in the stands will be treated to an aspect of weightlifting competitions that is typically shrouded in mystery.

USAW’s layout adjustment will affect not only how fans perceive and experience the 2022 National Championships, but is also likely to impact how the athletes themselves prepare and perform.

Aimed primarily at bolstering the viewing experience, the relocation of the warm-up platforms will bring the fans that much closer to the goings-on that occur beyond the platform itself.

Typically, weightlifting competitions are analogous to an iceberg. What you see take place on the big stage is only a small part of the overall event. Athletes in the back room work from an unloaded barbell to just shy of their opening weights in direct proximity of their coaches and fellow competitors alike.

Bringing the back room to the forefront will allow spectators to witness how their favorite athletes warm up for big weights, as well as put on full display the general atmosphere and tension that goes along with rigorous competitions.

Although USAW has remarked that this change is mainly for the benefit of the fans in attendance, the athletes will have to wrestle with it in their own way.

Many competitive weightlifters are highly ritualistic, and even a seemingly-innocuous change like moving the warm-up area can have significant impacts on how a competitor gets ready for their debut.

With the privacy of the back room removed, the athletes will need to work up to their competition weights in full view of the crowd as well as their direct competitors.

They’ll also be able to witness the goings-on on the competition stage with their own eyes, and likely have to contend with more ambient noise than they’re used to.

USAW has noted specifically that the alteration of the warm-up area won’t impact the ability of the coaches to do their jobs. Coaches who are managing multiple athletes simultaneously should have no issue navigating the venue floor as needed, and shouldn’t worry about LED displays or banners affecting their line of sight or movement from platform to platform.

The sport of weightlifting is thrilling in moments, but often suffers from many (many) minutes of downtime. USAW’s initiative in moving its closed-off back room to the forefront of the competition venue represents the organization’s commitment to making the competitions more exciting for everyone involved.

The success (or failure) of this change remains to be seen, but one thing is certain — the 2022 National Championships are all but confirmed to be a feast for the eyes.