Former World’s Ultimate Strongman (WUS) Co-Owner, Mark Boyd, is no longer affiliated with the organization. On May 27, 2022, Boyd and Core Sports — the parent company of WUS — released separate statements, both of which confirm Boyd’s removal from the organization(s). At the time of this writing, it is unknown whether Boyd’s ownership stake has been divested.

The news comes four days after Boyd released an audio recording of Luke Stoltman, wherein he says he was on a retainer to compete for Giants Live shows. Boyd claimed that the recording was proof of "corruption" within Giants Live, the company that IMG contracts to produce World’s Strongest Man.

Since the clip was released, Stoltman issued a response, and the audio has been removed from Boyd’s Instagram account.

[Read: What You Need to Know About How to Increase Strength]

Boyd’s initial post sparked a significant reaction from the strongman community — including 644 comments on the post itself (prior to deletion) and a Reddit thread with 1,153 comments and counting as of 9 a.m. Eastern Standard Time on May 28.

Based on Instagram stories that have since been deleted (see below), Boyd says he didn’t record the audio. BarBend reached out to Boyd but has yet to receive a comment. It’s not clear how Boyd acquired this recording. 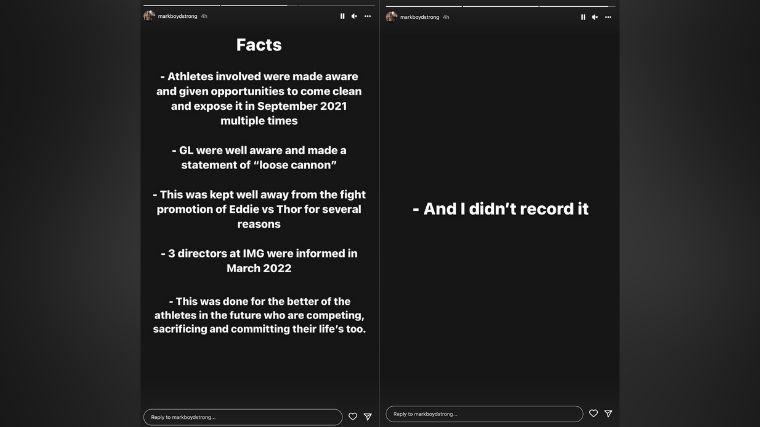 In his video, Stoltman says that he wasn’t aware he was being recorded, and the clip was a short snippet from a "30-minute" conversation.

In the clip, Stoltman says that Giants Live paid him and Tom [Stoltman, the 2021 WSM winner] a "retainer" of £1,000 per month to compete in the promotion’s shows. He also explained that Colin Bryce, the owner of Giants Live, allegedly implied more favorable WSM Groups and events if the Stoltman brothers "played ball."

A few hours after the clip was posted, Stoltman responded with a video of his own. In it, he says that the conversation took place in April 2021. He was speaking on the phone with Boyd and two other men he didn’t name about the prospect of him joining WUS’ Feats of Strength series in Dubai.

Stoltman says he accepted a retainer: "Yes, I was on a retainer. So are several other athletes…that’s the system of Giants Live, that’s what they do."

He also says that seedings for World’s Strongest Man are determined by one’s placings in Giants Live shows. While he did complain about his Group one year, he says he understands it was because he was a low seed.

In his video, Boyd says that he "fully stands by [his] actions and decisions," and that he’s stepping down to prove his actions weren’t to benefit WUS.

You can see the video below, courtesy of The Strong Movement YouTube channel:

Mark Boyd is a 105-kilogram Strongman who has won the titles of Scotland’s Strongest Man and Britain’s Strongest Man in that weight class. Boyd helped implement the popular Feats of Strength series — which saw multiple strongmen and strongwomen set world records.

It’s not known what Boyd will do next and what his departure will mean for Core Sports and World’s Ultimate Strongman. However, he did remark that "this is not the end for me in the promotion of strongman."

BarBend will update this article if and when more information becomes available.