During that interview, Shaw stated that he feels the weights used in competition are too light. He said it is a claim he has made multiple times, though he did not state if he was referring only to medleys and loading events or to WSM events as a whole.

On June 3, 2022, former strongman Laurence Shahlaei and his wife Liz Mason took to their YouTube channel to break down the stats of seven WSM events since 1983 to determine if the weights have gotten lighter. Shahlaei mentions how strongman fans take to social media to proclaim how weights have gotten lighter share their concern if the contest’s name lives up to the title it awards.

The short answer is the weights have not gotten lighter. In fact, the weights have, for the most part, only increased since the inaugural WSM contest in 1977, barring some adjustments for when weights were too heavy for athletes. Check out the full video below:

Disclaimer: the stats used in this article were sourced by Laurence Shahlaei and Liz Mason.

[Related: The 10 Most Memorable Moments From the 2022 World’s Strongest Man]

Shahlaei and Mason cover seven events that have been part of WSM for most of its existence and are still often used in modern contests: Super Yoke, Farmer’s Walk, Log Lift for reps, Deadlift for reps, Squat for reps, Loading events, and Stone loading (e.g, Atlas Stones). The graphs used in the breakdowns below take into account the max weight used in each event.

It’s apparent how much Farmer’s Walk has increased in weight over the past four decades. Notably, since 2010, the Farmer’s Walk has only been used as part of a medley rather than a standalone event, but has still maintained a steady track of 150 kilograms (330.7 pounds) in recent years. 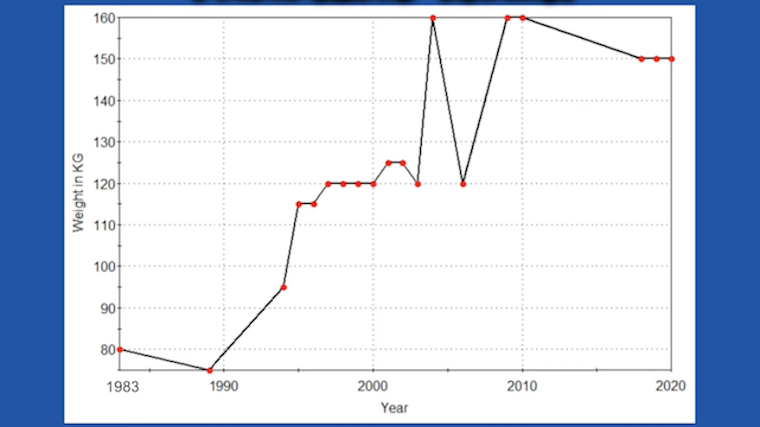 The implements used for the Farmer’s Carry are much larger and arguably clunkier now than in the earlier years of WSM. The event first debuted at the 1983 WSM contest and used very short logs rather than the long beams or frames often seen today.

Loading Races are difficult to directly compare because of the varying shapes of the implements year to year. For example, in 2020, athletes loaded monster truck parts, while in 2022, they loaded anvils, sandbags, and stones.

It is not unusual for Loading Races to include other awkward implements such as kegs, tires, or other misshapen objects.

The data in the graph below is derived from Loading Races that used a minimum of three implements. Additional factors that vary between Loading Races year over year are the distance, terrain, and height of the platforms — the latter of which has gotten higher in most recent WSM contests. 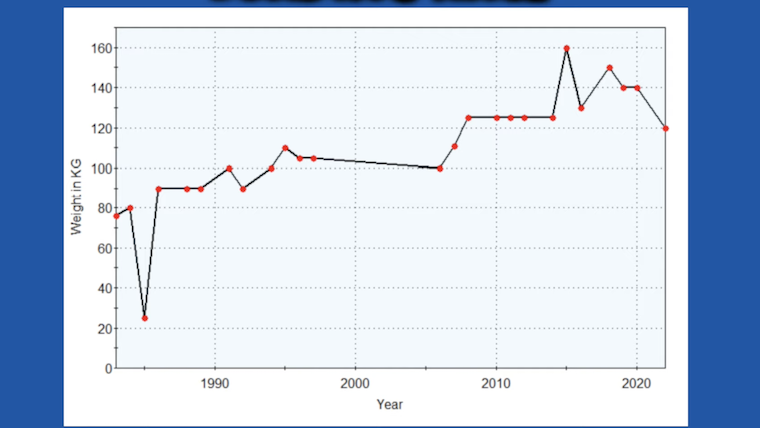 The Atlas Stones may be the marquee event of the WSM competition nowadays, but they weren’t introduced until nine years into the contest’s tenure in 1986. As seen in the graph below, the Atlas Stones have primarily only gotten heavier over time. The numbers below are referring to the heaviest stone used each year. 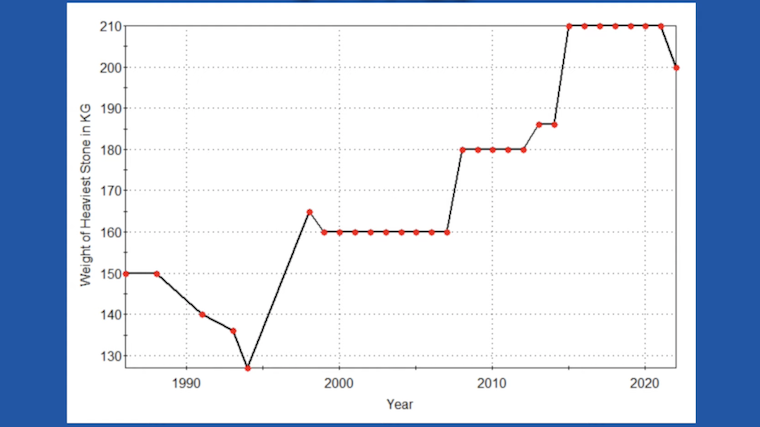 Additionally, earlier WSM contests did not feature the pedestals used today on which the stones must be loaded and secured.

While the Log Lift has been a mainstay for the majority of WSM’s existence, the Log Lift for reps event debuted in 1993. In its first few appearances, athletes were braced against a wall, requiring the implements to be lighter. 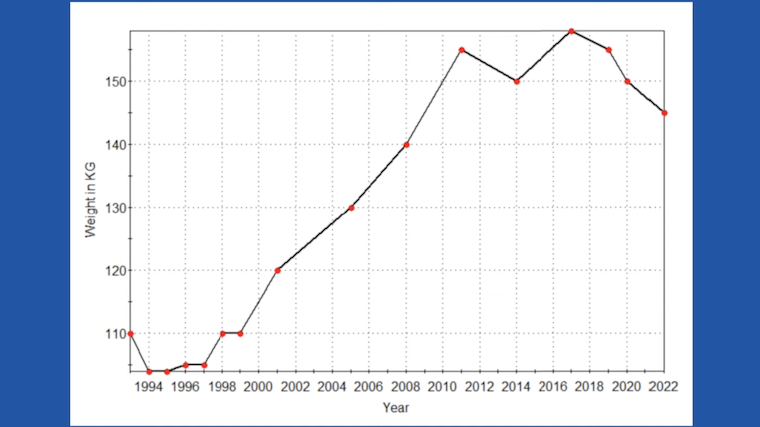 While there has been a dip of 20 kilograms in the weight of the logs used since 2017, the trajectory of the weight used over the event’s history is a steep hill.

The Super Yoke first appeared in WSM competition in 1995, where implements appeared to dangle from the frame athletes carried across their shoulders, influencing the stability of their midline. The first two instances of the event were at 300 kilograms and then sharply increased to 400 kilograms in 1998.

That proved too much of an increase in too short a time and it was brought back down a bit. It steadily increased to its peak of 600 kilograms (1,322.8 pounds) in 2019. 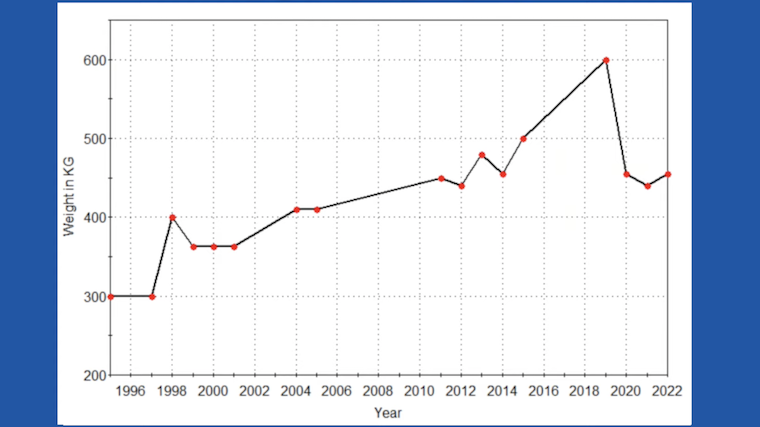 Shahlaei expressed how heavy the yoke was in 2019 when he competed, as he struggled with such a massive load. The weight was brought back down from that peak but remains on the heavier side of history at 450 kilograms (992.1 pounds). Notably, for the last several years the Super Yoke has been part of a medley rather than a standalone event.

Shahlaei believes that around 1,000 pounds is a solid baseline for when the yoke is used in medley events and 500 kilograms (1,102.3 pounds) is reasonable for standalone events.

The Deadlift for reps event debuted in 1997 at 300 kilograms. While the weight bounced around over the years since, the trajectory, like all the other events, is largely upward. Similar to other events, what the athletes must physically deadlift each year varies.

Implements include cars, metal baskets filled with kegs, and frames loaded with wheels of cheese, and the barbells vary as well (e.g., standard, axle). 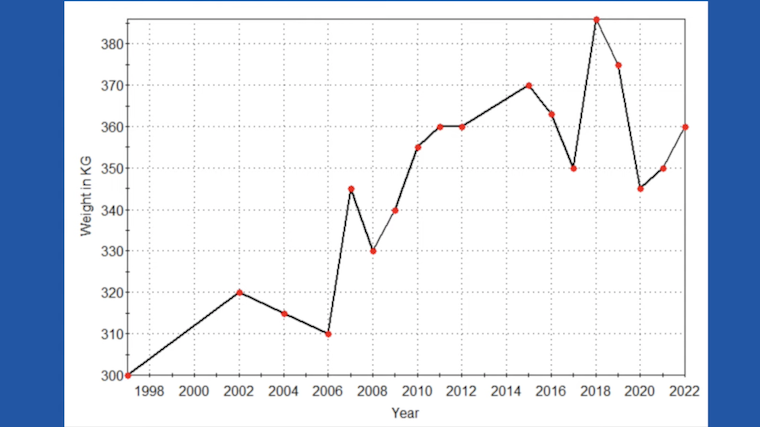 The peak weight for this event was in 2018. The stark variations in weight are also influenced by when a Deadlift for reps is used as a standalone event, or as part of a medley or race.

Since the Squat for Reps event entered the WSM event lineup in 2000, it has had a flatter trajectory than many of the other events. While the weights have only ever increased from the 318.5 kilograms (702.2 pounds) it debuted with, the 2022 WSM contest saw that same weight that was used in 2000.