On May 29, 2022, Tom Stoltman of Scotland stepped onto the highest step of the awards podium at the World’s Strongest Man (WSM) contest for the second straight year. He won five out of six events in his group during the Qualifying stage and never finished lower than third in any of the six events in the 2022 WSM Final.

Stoltman became the 10th strongman in history to win the WSM contest twice and the eighth to win the competition in back-to-back years. He earned his second title by scoring 53.5 points out of a possible 60 — 11.5 more than the tied-on-points runner-up Martins Licis and bronze-medalist Oleksii Novikov.

BarBend had the opportunity to interview Stoltman shortly after his victory in Sacramento, CA. He shared his mindset during the competition, the dividends his training paid on the sport’s biggest stage, the risks he took like trusting his coach to choose his tacky for the Atlas Stones, and more. Check it out below. 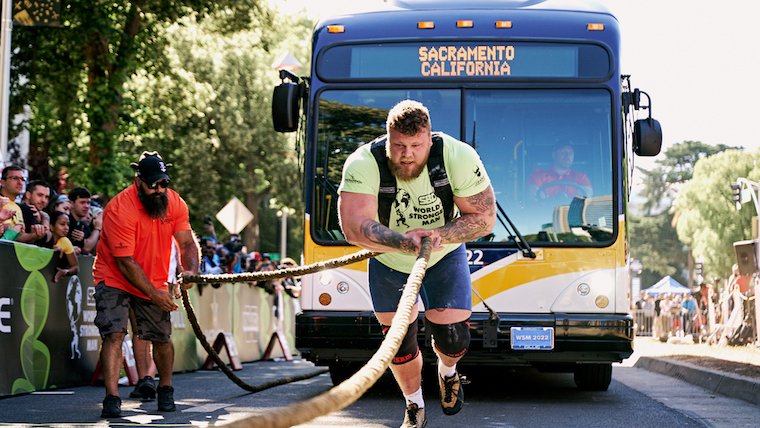 Editor’s note: The below interview is directly transcribed from the live in-person with Tom Stoltman. Bolding has been added for emphasis.

BarBend: You were extremely consistent during the Final, never finishing worse than third in any of the six events. Did you expect to perform as well in each of the six events as you did? Or did you ever surprise yourself?

Stoltman: The two events I surprised myself in, were the Car Deadlift and Bus Pull. Again, Car Deadlift for me… if you look back at my recent performances and that, I’ve never come out… I’ve never been fourth, fifth, you never mind third, second, or first place. So that was a massive shock for myself. And then obviously, like I said, the Bus Pull as well, I never not finished up the bottom three in bus pull and trap. So that’s just the kind of dedication I’ve had towards training with it all.

I’ve been working my butt off in training and those two events shocked me that I did so well in them, and I think that helped me towards the title because the other four I was pretty comfortable with, but those two events were the ones that I was able to keep my points quite high in them. 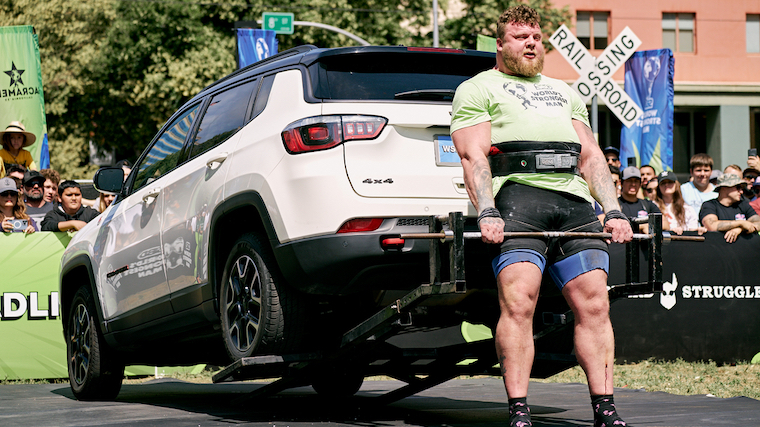 BarBend: In the sixth round of the Flintstone Barbell, you flung the weight overhead and then smiled as though it was any other day of the office. Was that playfulness for the crowd or were you really comfortable even at such a heavy weight?

Stoltman: Yeah, I would like to… I just go about like my mindset as well. This year was just cool and calm. And I told my coach what I wanted to hit and it was, we just had that plan and yeah, I was smiling and training when I was doing it. I was just putting on a show for the crowd, but just to show them how easy it was, because like I said, I’m not really known for the pressing side of things and to be able to keep up with the big boys and to come second in that event is a massive thing for me. So yeah, I was enjoying myself out there, give me smile to the crowd.

BarBend: What were your thoughts going into the Power Stairs sitting 3.5 points behind Novikov? Did you know that event was going to be the difference-maker in the competition?

Stoltman: I kind of… I don’t really think about anyone else as long as I do my own job, which… in the Power Stairs, I knew going against Brian [Shaw], I had to be a good pacemaker because I knew Brian was really good at these events. I’ve never, ever done Power Stairs before, but I just used my height. I used kind of my experience as well and seen other people go before.

I thought Novikov may have struggled because of his height. And in the end, he did and that kind… he made the mistakes… I didn’t. But I always think that if I just concentrate on myself, that’s what my coach said to me and Sinead, my wife, said don’t think about anyone else. You can still win this. There’s 20 points to play for, you’re three points behind, anything can happen. It’s happened before and luckily it didn’t happen… it wasn’t me that made the mistakes, it was Novikov. So yeah, I was just nice and confident going into that one. 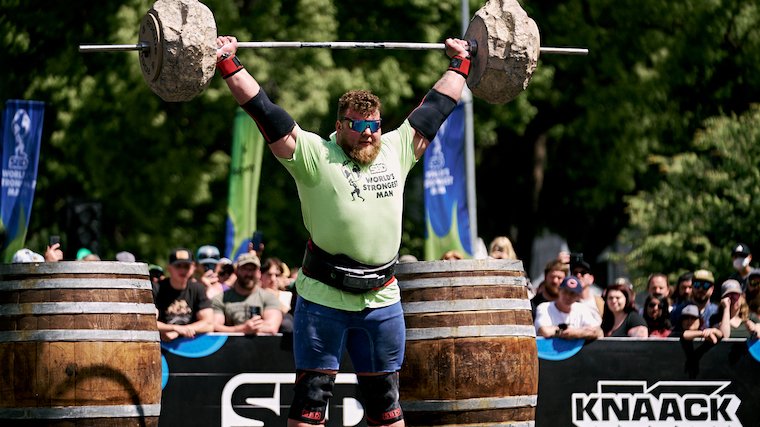 Stoltman: That was the most nervous stone one I’ve ever done in my life. I mean, that’s the first time I’ve ever had my coach pick my tacky for me as well. So I was kind of questioning that and then just going out there… because obviously winning one’s good, but I wanted to back it up, and I had a lot of pressure on me as well and the crowd did as well, but once I got out there, I knew that I had my job to do… was to load other stones and I knew I was capable of doing it.

Before that I was kind of like, why am I letting him choose my tacky? Why don’t I just do it myself? But I put all my belief in him and that’s what you need to do when you’ve got a coach and it paid off. So yeah. But yeah, it was very nerve-wracking for myself.

BarBend: After loading your fourth Atlas Stone, you could be seen peering across the arena to Novikov, who still had not loaded his third stone yet. Did you know at that moment that you clinched your second title?

Stoltman: Yeah. I kind of took my foot off the gas a wee bit as well, with that as well. The good thing about it, the stones this year was you could see each other doing them. So I… Novikov went out quick, but then he obviously stumbled the four-point. And I think after that, when I knew I can slow down a wee bit and make sure the 200-[kilogram stone was] going to go up because I think last year, 210-[kilograms], I hit the edge [of the pedestal] and it just went up. So yeah, I felt I was confident, but I still… like I said, I still had the job to do and I never ever disrespect athletes and celebrate before I finish the event. I finish the event, then I celebrate. But yeah, I was quietly confident then I won World’s Strongest Man.

BarBend: Now that you are the 10th strongman in history to win at least two World’s Strongest Man titles, do you foresee yourself eventually winning three more championships and tying Mariusz Pudzianowski‘s record of five titles?

Stoltman: Yeah. I mean that’s the goal for myself, is to even better that, but like I said, winning two in a lifetime’s unbelievable. I think if you asked 90 percent of the strongmen who I competed with, to win one World’s Strongest Man title, they’d be happy with that. So winning two for myself’s unbelievable. But let’s do five or six, maybe even seven… who knows?