The International Weightlifting Federation (IWF) has made what it considers to be significant strides toward improving the sport’s leadership and culture.

In a Jun. 26, 2022 press release from Tirana, Albania — the site of the Special & Electoral Congress as well as the recently-wrapped European Weightlifting Championships — the organization confirmed that it has elected Mohammed Jalood as President, as well as named 11 other new members to its Executive Board.

The IWF believes an adjustment in leadership will satisfy many of the member federations who have long desired "renewal and change within the organization." 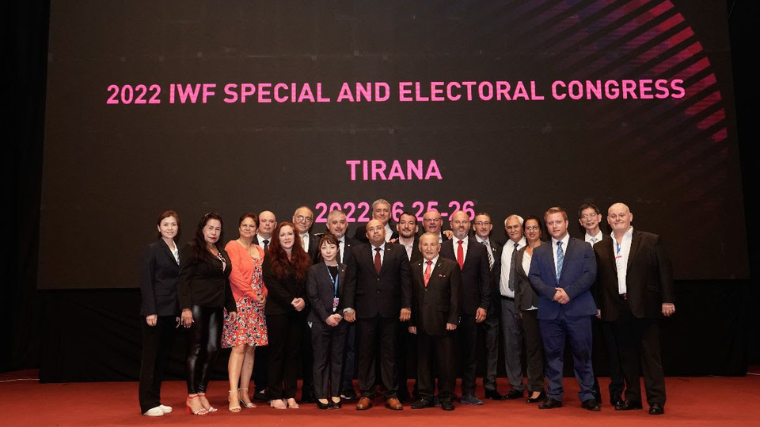 While the IWF stressed the importance of retaining "experienced leadership" during this transitory period, the 12 new members of the Executive Board represent a 66% change in staffing overall. Moreover, women were included "substantially above" the minimum quota, and three Athlete Representatives were appointed with full voting rights.

President Jalood of Iraq had this to say on the matter:

"We have been given the confidence and trust of our members to bring positive change…there is a renewed energy within our organization, and my team and I are ready to get to work and start delivering good things for our sport."

Below is the new roster of IWF leadership as established at the Congress in Albania.

*Note: According to a Jun. 27, 2022 report by insidethegames, there was a voting error in Tirana that led to the wrongful appointment of Quinones as General Secretary. A rounding error in the vote-counting procedure may have wrongfully led to Quinones’ selection, who has expressed willingness for the IWF to hold a recount.

As of the morning of Jun. 27, the IWF has yet to release a statement.

The IWF has long battled accusations of corruption and mismanagement, largely aimed at its leadership under former President Tamás Aján. Aján served as the head of the organization from 2000 until 2020.

President Jalood closed his first remarks as head of the IWF on a positive note, saying that he and his governance are "focused on the future of weightlifting and ensuring that we work with our Olympic partners."

The International Olympic Committee has approved weightlifting’s place as an Olympic event for the Paris 2024 Games, though its standing as an Olympic sport beyond that is tenuous.