Published on May 22, 2022, the Doodle celebrates The Great Gama’s 144th birthday. It depicts a muscular man with giant arms and lean midsection holding a steel club over his shoulders as he splits the word "Google" in half with what appears to be the sheer force of his presence. 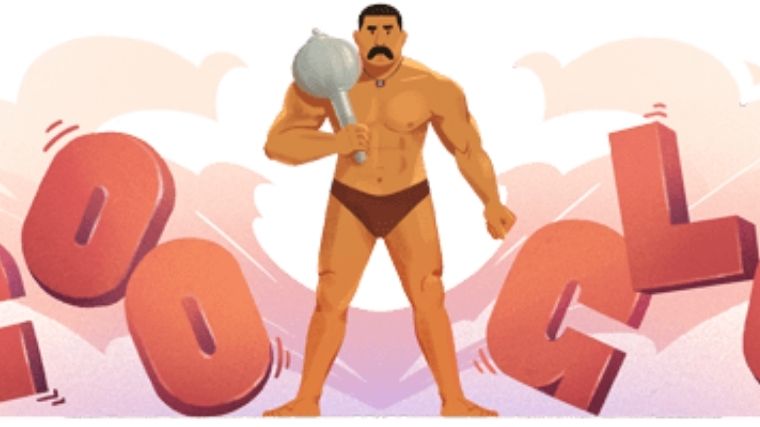 Did you miss the Doodle? You can see it here via Google’s archive.

Pehlwan was born in the Amritsar District of British India on May 22, 1878. At 10 years old, Pehlwan entered a local strongman competition. He won the 1888 competition and went on to have a prolific wrestling career.

According to Google, 10-year-old Phelwan performed a routine that consisted of 500 push-ups and 500 lunges. (Hey, everyone starts somewhere.)

Eventually, the Indian wrestler, who was billed as 5’8″ and 250 pounds, graduated to a purported daily bodyweight routine consisting of 5,000 squats and 3,000 push-ups. If that wasn’t impressive enough, Pehlwan apparently used a 100-kilogram (220-pound) Hasli — a donut-shaped disc — during his sets.

ESPN also states that Pehlwan lifted a 1,200-kilogram (2,645-pound) stone in 1902. It’s unclear how he hoisted the giant rock, which is now on display at the Baroda museum in Vadodara, India.

For all his feats of strength, Pehlwan is most known for his impressive legacy as a wrestler. He was undefeated throughout his career and was so dominant that finding Pehlwan opponents proved difficult. He officially retired in 1952 at 74 years old.

In addition to his status as a champion wrestler and strongman, which apparently inspired Bruce Lee’s training, Pehlwan was hailed as a hero. After the 1947  Partition of India, when British India was divided into Pakistan and India, Pehlwan moved to Pakistan. Amid the Hindu-Muslim riots, he supposedly saved "hundreds" of Hindus (according to Indiatimes.com).