FST-7 Training Explained — Can You "Shock and Awe" Your Muscles Into New Growth?

Every bodybuilder has their own claim to muscle fame. From Arnold Schwarzenegger’s famous addiction to the pump, to Dorian Yates’s high-intensity, one-set-to-failure approach, it has been proven time and time again that there’s no one way to build an impressive physique.

FST-7, or "Fascial Stretch Training" (the ‘7’ referring to the number of finisher sets at the end), has enjoyed some time in the limelight as a training tool employed by Men’s Physique athletes like Jeremy Buendia and Open Bodybuilding pros like Phil Heath alike. 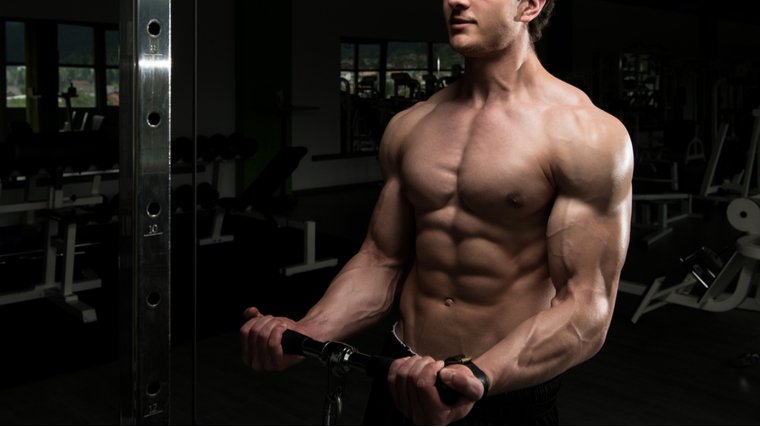 Born from the mind of career bodybuilding coach Hany Rambod, FST-7 promises to deliver impressive muscle growth in a short amount of time — if you can handle the pain that famously comes with it.

But just how does FST-7 work? Is it backed by legitimate science, or is it just another fad? The results may speak for themselves, but the jury’s still out.

What Is FST-7 Training

The most important part of FST-7 is to understand that it isn’t one specific program. Rambod’s FST-7 is a training principle or style that you can apply to nearly any exercise or muscle group.

By applying FST-7 to your bodybuilding workouts, you’re making a conscious effort to lengthen your fascia, the "casing" that helps to connect or conceal your muscles, bones, tendons, and ligaments. You can think of fascia as a soft structural architecture that holds you together.

By performing high-rep, high-intensity sets of a given exercise at the end of your workout with little rest, Rambod believes that FST-7 can alter the biological structure of your fascia, making it more volumized and permitting more muscular expansion. This translates to a fuller, more three-dimensional muscle belly.

What the Science Says

Any good training approach should be able to stand up to scientific scrutiny. While the medical community has long documented the nature and behavior of muscular fascia, there aren’t any widely-available studies on Rambod’s FST-7 approach to bodybuilding specifically.

However, the general idea behind FST-7 is based in (at least some) reality. Fascia does have elastic properties and will, in fact, stretch if enough tension is applied. (1)

Fascial remodeling is a core aspect of most static stretching regimes, although most research on the biological impact of extended stretching centers around muscle tissue. (2)

All in all, Rambod’s FST-7 training philosophy isn’t credibly backed by a solid body of evidence, but is at least sound in concept. It also comes with plenty of practical endorsement from high-level bodybuilders.

Who Should Try FST-7 Training

It’s not for everyone, but FST-7 can be a powerful training tool in the right contexts. If you’re on the fence about trying out Rambod’s approach to muscle growth, consider first whether it’s the right decision for you.

As with any high-intensity training technique, beginner physique aspirants should probably steer clear of FST-7 training. When you’re new to training, your muscles tend to grow like weeds, and a grueling workout with FST-7 might be overkill.

Conversely, muscle growth gets exponentially harder the longer you’re in the gym. If you’ve been in the gym grinding away for several years, or maybe have even stepped on stage once or twice, FST-7 training might be relevant for your goals.

Those On a Plateau

Feeling "stuck" in the gym is as close to anti-fun as it gets. Whether you’ve been hammering away at the same program for months and seen little return, or you’ve seemingly tried every routine under the sun and made no progress, plateaus can be a serious blow to your motivation in the gym.

In such cases, you might consider plugging in a high-intensity technique like FST-7. Not only will it provide a novel stimulus that you’re not used to, that kind of muscular "surprise" can often induce enough stress to drive new growth.

If You’re Short on Time

One side perk of FST-7 is that it packs a lot of volume into a short amount of time. Although the training is more than its finale, seven hard sets burned through in less than 10 minutes also helps make FST-7 a viable option if you can’t commit to a two-hour training session.

Anything is better than nothing (usually), but that doesn’t mean that you can’t go wrong with FST-7. Rambod and his athletes certainly boast an impressive resume, but FST-7 training may not be right for you regardless.

It’s a common misstep for beginners to closely mirror the training habits of their physique idols. If you’re new to the gym, you shouldn’t train like your favorite bodybuilder does now — you should train the way they did when they were starting.

This extends to FST-7 as well. Since the philosophy is high-volume and high-intensity, it may yield more stress than you’re capable of bearing. You’ll do just fine in the gym if you stick to the basics and keep it simple.

This isn’t a hard-and-fast rule, but you may not want to pick up FST-7 as part of your workouts if you’re currently battling an injury. Any high-intensity training technique tends to come with breakdowns in your form as you push yourself to the limit.

A degradation of technique may put vulnerable tissues at risk, especially if you’re focusing hard on getting that last rep out.

This isn’t to say that FST-7 is off the table if you’ve got a sprained ankle or something minor, but you should consider how hard you can actually work if you’re nursing something.

Those who go to the gym for fun or just to stay in shape overall may have no need for something as precise (and painful) as FST-7. While it certainly may help you make solid muscular gains, any high-density training technique will also create serious amounts of muscular damage and general fatigue. 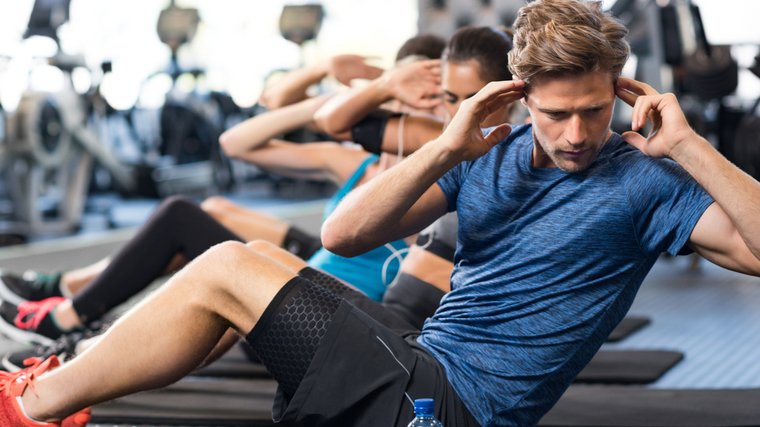 If you have a physically-demanding job or home life, that extra stress might be more than you need from an exercise routine. It’s perfectly okay for the gym to be a means to an end, not an end unto itself.

All bodybuilders appreciate the impact that solid nutrition has on their training. In an article he wrote for Simply Shredded, Rambod outlined his approach to pre, peri, and post-workout nutrition for those following the FST-7 way.

Getting your food and water intake right can, according to Rambod, make or break the results that FST-7 aims to provide.

Rambod stresses the crucial nature of both a good pre-workout meal and ensuring you’re drinking enough water. He recommends not training fasted if you employ FST-7, and instead aiming to have eaten at least two solid-food meals prior to beginning a workout.

As FST-7 is a metabolically-demanding style of lifting weights, Rambod also emphasizes that you should drink plenty of water before (and during) your workouts.

Roughly a liter of water is the benchmark Rambod suggests that anyone should hit during a FST-7-inspired training session. He also notes that you should consume a bit more water if you train in a hot climate or sweat a lot in general. Without adequate fluid intake, you may find it difficult to secure the skin-tearing pumps FST-7 provides.

Rambod claims that you should ingest a high-quality protein source as soon as possible following your workout. This holds true no matter what kind of lifting you do in the gym, but is especially relevant if you employ FST-7.

Capping off your training session with an intensity technique that burns your muscles to a crisp also drains you of any available fluids and stored energy. As such, you’re particularly susceptible to utilize any nutrition you consume.

Rambod suggests that your post-workout shake or drink also include a fair amount of carbohydrate to replenish the glycogen you’ve spent.

Since FST-7 is a series of principles and not a singular routine, you can apply it to your existing workout plan if you like, or go for a pre-written template that puts its core tenets into action.

Rambod has stressed that FST-7 is about more than just the seven capstone sets you finish your session with. Leaning heavily on the principles of powerbuilding, FST-7 also necessitates that you begin your workout with heavy straight sets, follow up with higher-rep metabolic work for the pump, and tie it all together at the end with the seven cluster sets.

This workout puts FST-7 into practice and is aimed squarely at blowing up your arms. Per Rambod’s recommendations, make sure that you consume plenty of water throughout, especially while resting between the seven cluster sets at the end.

Note: For the final two exercises, rest between 30 and 45 seconds at most.

How to Program FST-7 Training

Even physique pros like Phil Heath don’t make FST-7 a core constant of their training plans. Like any intensity technique in bodybuilding, the devil is in the dosage. Use it too sparingly and you might be wasting your time, but go overboard and you’re headed for overtraining or perhaps even an injury.

Rambod himself recommends that anyone who includes FST-7 into their bodybuilding workouts do so in a rotational manner.

Instead of finishing every workout with FST-7 clusters for several weeks and then taking a break, you can plug FST-7 into one body part session for several weeks, and then switch it to a different workout later.

This ensures you’re properly acclimating to the rigors of the style without overloading yourself all at once.

Change Your Weights as Needed

While you should proceed through the bulk of your training session however it is written, Rambod has noted that the weights you use specifically for the seven cluster sets aren’t particularly important. Your goal is to shunt as much blood into the muscle as possible and volumize it, so feel free to switch to lighter weights between sets if you need to.

Do It at the End

It’s worth mentioning in plain terms — FST-7 style training is a finisher for your workouts, not a warm-up. The cluster sets will fully burn you out and you probably won’t have any energy left for subsequent tasks, even if you want to train a different muscle group.

As such, make sure the seven finisher sets are just that, finishers. Once you wrap them up, call it a day in the gym.

Rambod himself has noted that FST-7 isn’t the best choice if you perform a lot of heavy compound lifting in your workouts. While you can work with the barbell in the 6 to 10-rep range just fine, the seven cluster sets that are the hallmark of the technique aren’t the most appropriate for the squat or deadlift since your technique is likely to fall apart in a big way.

Instead, FST-7 is best utilized on single-joint free weight lifts, machine exercises, or cable moves. It’s both easy and safe to push yourself to the limit on a cable curl or dumbbell flye, for instance.

Hany "the Pro Creator" Rambod’s FST-7 training style is all the rage among competitive (and recreational) bodybuilders. The science hasn’t conclusively determined if fascial adjustment or remodeling is a viable strategy for producing physique champs, but anecdotally, his clients seem to enjoy the method quite a bit.

Rambod’s training style has produced over a dozen Olympia title victories in various divisions, including the triumphant (and at the time, unheard of) comeback victory of Jay Cutler in 2009 who leaned on Rambod after his loss the year prior.

Does FST-7 reinvent the wheel of resistance training? Not necessarily. Working in various rep ranges, tactically utilizing intensity techniques like cluster sets, and ripping your muscles to shreds with a big pump have always been integral to building the physique of your dreams. Rambod didn’t create these ideas, but he may just have perfected them.