The second-to-last event of the 2022 World’s Strongest Man (WSM) contest was the return of the Reign Total Body Fuel Power Stairs. As the leaderboard got ever closer to its final form, strongmen still in contention for the podium had to make any big pushes they had left in their proverbial tanks.

Novikov seemed to be on an unstoppable run in the Final, scoring three wins out of four events. He held a 3.5-point lead over Tom Stoltman coming into the Power Stairs. Maxime Boudreault scored the fastest time, duck-walking the trio of 226-kilogram (500-pound) implements up nine stairs for first-place points. Here are the full results: 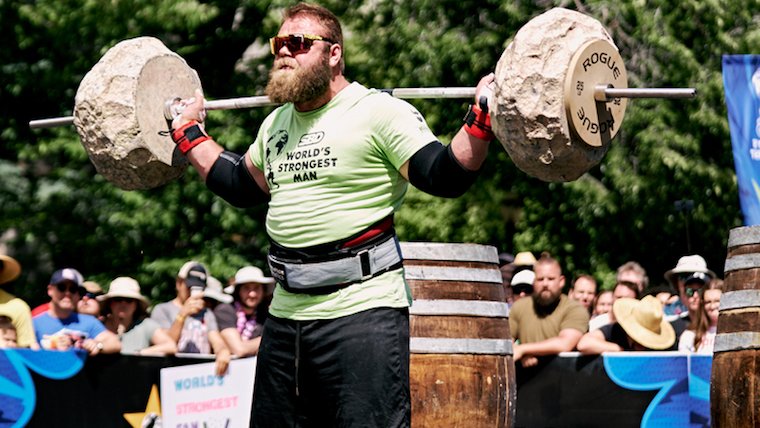 Athletes were given 75-seconds to move all three 500-pound implements from their starting positions to the top of the stairs.

Athletes competed in head-to-head heats. The first match-up was Melsted versus Rhéaume. They were at the bottom of the leaderboard and out of contention for the podium but still chalked up for battle in front of a huge crowd.

Heat two pitted the remaining Canadians against each other — Hooper versus Boudreault. As was the case with the Loading Race, Hooper’s speed was jaw-dropping. Boudreault kept pace and ultimately took the lead when Hooper couldn’t lift his third implement you the second step.

Luke Stoltman stepped on stage to compete against Mitchell after Shaw scoped out the implements and the height of the stairs. Stoltman was 8.5 points behind Licis for the bronze position, so his podium hopes were extremely thin. Mitchell was five points behind Licis, so there was the possibility that Mitchell could improve upon his fourth-place finish in the 2021 WSM.

Stoltman took an early lead as Mitchell fumbled his first implement on the first stair. Stoltman placed two implements atop the stairs by the time Mitchell got his second implement to the staircase. Stoltman slowed down after achieving seven stairs, unable to get enough height for an eighth stair. Mitchell scored six stairs and never touched his third implement.

Heat four was a battle of the giants — Shaw versus Tom Stoltman. Shaw’s chances for a fifth WSM title were nearly non-existent, but he still sought a big finish in one of his stronger events. Stoltman was 3.5 points behind Novikov, and a big finish could close that gap. Both men’s height was a colossal advantage in this event.

Stoltman one-motioned the first two implements to the first stair and claimed a substantial lead. Stoltman converted all nine stairs by the time Shaw reached his third implement. The four-time WSM champ was determined to finish within the time cap but narrowly missed as the whistle blew barely before he got the third implement up the ninth stair.

The final heat saw the competition leader Novikov against Licis, who sat in third place overall — nine points off Novikov’s lead. Boudreault’s Power Stairs time was the score to beat.

Both men had fast walks out the gate, but Novikov struggled with the height of the steps. Licis was moving at lightspeed, clearing all nine stairs in 44.56 seconds. Novikov was gassed out by the third implement and only secured six stairs. 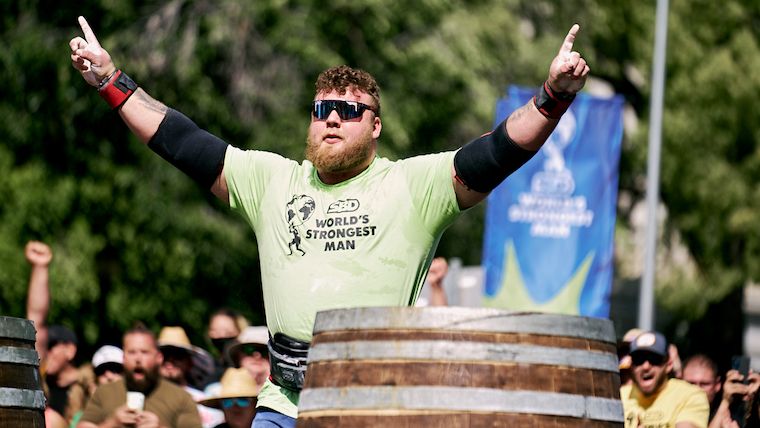 There is one event left to go before the 2022 WSM podium is finalized — the Atlas Stones, scheduled for 2:00 p.m. PST. It is Tom Stoltman’s signature event, and he holds a 1.5-point lead over Novikov. If Stoltman finishes in the top two of the Atlas Stones, he will retain his WSM title — the first strongman to go back-to-back since Brian Shaw won his fourth title in 2016.