The third and final event of the first day of the 2022 World’s Strongest Man (WSM) Final in Sacramento, CA, was the return of the Flintstone Barbell. Not seen on this stage since 1995, strongmen attempted to establish their max behind-the-neck press. The gimmick involved trading weight plates for gigantic rocks on each end of the barbell.

Oleksii Novikov exuded superior technique and successfully scored his second event win of the Final. Here are the results: 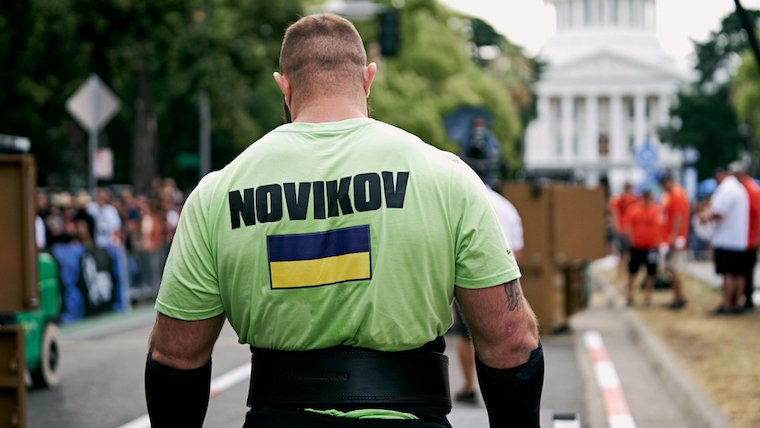 Unanticipated seventh and eighth rounds were added to the event. The former was 240 kilograms (529 pounds), and the latter was 246 kilograms (542 pounds).

Melsted was on the bottom of the leaderboard after the KNAACK Giant’s Medley and the Car Deadlift and was charged to lift first for the second straight event. He moved the barbell successfully overhead in the sunny 77-degree weather to advance.

Rhéaume was second to the barbell and made quick work of it. Luke Stoltman entered third, quickly warmed up his shoulders, and advanced to round two.

Boudreault was up fourth, needing a strong finish in this event. He took a wide grip on the barbell and advanced through.

Shaw, who trained for this event with Boudreault, stepped on stage for his first attempt. He cleared the barbell without issue.

Licis lifted in the sixth position and implemented a split-jerk technique to advance to round two. Hooper entered seventh, tightened his lifting belt, and pressed the barbell overhead from a front rack position.

Mitchell didn’t appear comfortable getting under the barbell but quickly flung it overhead. Tom Stoltman opted for a wide grip and cleared the buy-in round as well. Novikov cleared round one without resistance via a split-jerk, and all 10 men were on to round two.

Melsted returned to the floor for round two. He handled the big jump in weight without issue and advanced to round three. Rhéaume remained business as usual and breezed through round two, lifting from a front rack position.

Like Stoltman made easy work of round two, as did Boudreault, Shaw, and Licis. Hooper stayed the course, lifting from a front rack, and confidently converted.

Mitchell kept the scoresheet clear of any missed attempts. Tom Stoltman had no problem in round two, and neither did Novikov. All 10 men advanced to round three.

Melsted again took the round-opening lift but couldn’t lock out his left arm entirely. The barbell fell awkwardly behind him, causing the medical team to jump from their chairs, but no injury occurred.

Rhéaume was second to lift, staying in the front rack. He couldn’t straighten his elbows, and round three claimed its second casualty.

Luke Stoltman sought to be the first to advance to round four. He clapped his chalked hands, zoned in under the barbell, and got the down signal from Head Judge Magnus ver Magnusson — on to round four.

Boudreault remained in a wide grip and decided to keep Luke Stoltman company in round four.

Shaw took a visualization rep and re-chalked his hands before getting back under the barbell, which bent slightly across his shoulders. A big lockout and fist pump to the crowd, and Shaw proceeded to round four.

Licis took a few deep breaths, braced himself, and split-jerk his way into round four. Hooper’s front rack looked like it would falter, but he hung on and locked out the weight to advance.

Mitchell sought to stay in the majority headed to round four. His bar speed made clear it would take much more weight before he would bow out of the event.

Tom Stoltman smiled through the weight, making it look casual. Novikov trekked back to the barbell and again split-jerked the weight overhead sharply. Eight men through to round four.

With Melsted and Rhéaume eliminated, Luke Stoltman was first to try his hand at 470 pounds — world record territory. He was shaky at the top but locked it out to advance to round five with a world record in hand.

Boudreault stayed committed to his wide grip and quickly joined Luke Stoltman in round five. Shaw dramatically reclaimed the stage to the crowd’s cheers, slowly made his way under the barbell, and converted.

The crowd’s chants greeted Licis back to the stage:

A massive jerk overhead, and Licis booked his ticket to round five.

Hooper put in a massive effort which looked like he would lock it out at two different moments but ultimately couldn’t get there. Hooper was the first to fall in round four.

Mitchell shifted several times under the barbell to get comfortable but then made easy work of it again. Tom Stoltman shrugged off 470 pounds, still looking for a challenge.

Novikov braced the weight overhead with flawless technique, and seven men ventured into round five.

Luke Stoltman remained in the world-record-setting position and lifted first in round five (world records are credited to the first athlete to secure the lift successfully). He got the barbell off his shoulders but not fully overhead, suggesting that this may be the deciding round.

Boudreault could claim the world record with a successful lift. He wide-gripped the barbell but to no avail. 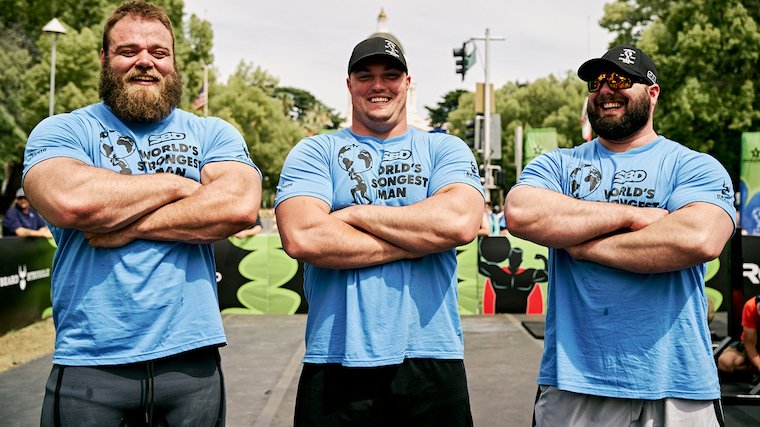 Shaw was back on the floor with the pressure on. A clap of disappointment as the barbell tumbled forward, and Shaw was eliminated.

Licis would test if the split-jerk proved superior as he stepped under the barbell for the fifth time. A great lift and a successful lockout scored the world record for Licis.

Mitchell took to the stage looking to match Licis, knowing a nice point boost would come with it. The weight proved too much, and Mitchell was out.

Tom Stoltman breezed through the first four rounds, and the fifth wasn’t any different, essentially strict pressing the weight overhead.

Novikov was the other split-jerker in the field alongside Licis and aimed to join Licis and Tom Stoltman in the final round. A seemingly easy lift for the Ukrainian, looking at his absolute best heading into round six.

Licis was the first to attempt past the 500-pound milestone — long gone was the 463-pound world record coming into this event, held by Gary Taylor since 1995. Licis’ technique withstood 510 pounds, and he was into round seven (which did not yet have an established weight — no strongman was expected to reach that round).

Tom Stoltman still sought a challenging weight as he snuck under the barbell. He appeared to lock it out, but it wasn’t clear if he held it long enough for the down signal from ver Magnusson. After review, it was called a clean lift, and Stoltman advanced.

Novikov’s defied expectations this far in the event as his immaculate technique made every weight seem routine. He shook back and forth with the weight overhead but locked it out nonetheless. A double fist-pump to the crowd and all three men advanced to round seven.

Tournament Director Colin Bryce and his team had to supply an additional weight — 510 pounds was not enough to fend off Licis, Novikov, or Tom Stoltman. The weight was increased to 240 kilograms (529 pounds).

Licis stepped back into the floor for his seventh attempt of the event. He repeated his breathing ritual and hoisted the barbell onto his shoulders. The weight was finally too much for "The Dragon," and he bowed out after six successful rounds.

Tom Stoltman had the opportunity to claim the world record now. Thus far, he relied on sheer strength to press the barbell overhead, and it nearly cost him in round six. His wide grip was enough, and Stoltman advanced to round eight, assuming Novikov could match him.

Novikov hyped up the already roaring crowd as he situated under the barbell. His split-jerk remained impenetrable, and two WSM champions were off to round eight.

Tom Stoltman opted not to attempt this weight. Novikov decided to make an attempt and stepped onto the stage for the final time with 240 kilograms (542 pounds) on the barbell.

The crowd was in awe of the astounding final lift by Novikov to claim the world record and the event win. He exits the day with two event wins and the overall competition lead. 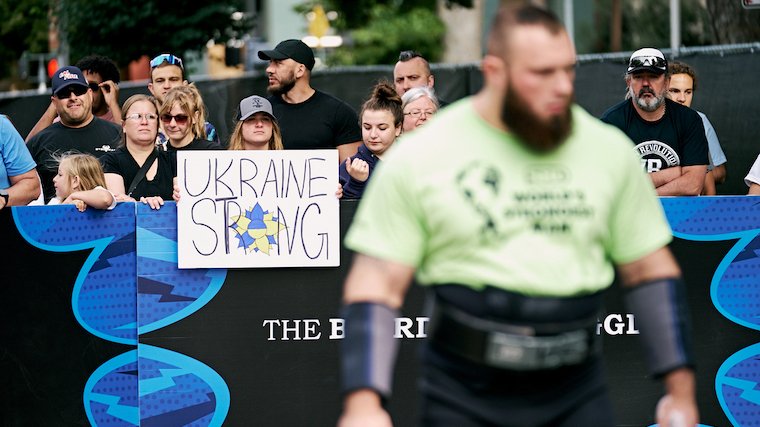 The final day of competition includes another trio of events. The Bus Pull at 8:00 a.m. PST will open the day. The Reign Total Body Fuel Power Stairs will occur at 11:00 a.m. PST. The closing event is the Atlas Stones at 2:00 p.m. PST, where a 2022 WSM champion will be crowned.