The 2022 World’s Strongest Man (WSM) Final roster was set following the third day of the Qualifying stage. My name is Phil Blechman, and I’m on the ground in Sacramento, CA, covering the 2022 WSM contest.

Before the start of the competition, I wrote a prediction article on BarBend about which strongmen I thought would make the Final, based on the makeup of each of the five groups and the six scheduled events.

We’re going to rehash how accurate those Group predictions ended up being, and make predictions about who will emerge victorious as the 2022 WSM champion. The field is stacked this year, and there is an argument to be made in favor of nearly the entire Finals roster. Let’s dive in with an event-by-event breakdown and which athletes are likeliest to excel.

Editor’s Note: This article is an op-ed. The views expressed herein are the author’s and don’t necessarily reflect the views of BarBend. Claims, assertions, opinions, and quotes have been sourced exclusively by the author. 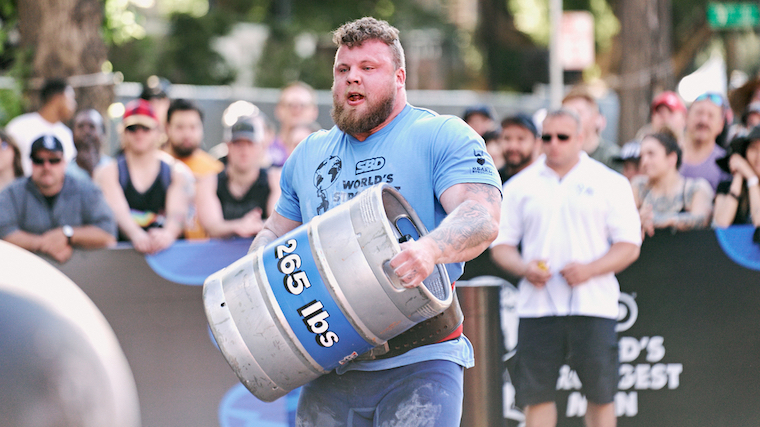 Below are the predictions I made for how the final standings for each group would look at the end of the Qualifying stage. I accurately predicted seven of the 10 Finalists, though there were some glaring misses that we’ll cover below:

That reigning WSM champion Tom Stoltman would win his group wasn’t a bold prediction. He has been impressive in every contest he’s competed in since the 2021 WSM, and his performance in the first three days of the 2022 WSM demonstrated that his preparation was effective this time around as well.

The missed prediction underrated Rhéaume, who posted an under-the-radar performance throughout the group stage and then upset Faires in the Stone-Off. Faires is certainly a Final-worthy strongman and was advantaged in the Stone-Off, but he slipped on his second attempt of the sixth Atlas Stone, and Rhéaume pulled off the upset.

I had Šmaukstelis reaching the Stone-Off following his win at the 2022 Strongman Champions League World Record Breakers before the 2022 WSM, but Rhéaume came in clutch when it mattered.

There were some clear miscalculations here that are obvious in hindsight. First and foremost, I am so happy to have been so wrong about Mitchell Hooper. The 2022 WSM is only his sixth major strongman contest, and is his first on an international stage. There was no legitimate way to calibrate his relative inexperience versus the other elite strongmen. Here’s what I said in the original predictions piece:

"Finally, Hooper is a wildcard. The 26-year-old Canadian is making his WSM debut and will likely use this year to gain some much-needed experience competing against the best of the best. Of course, any of these athletes can shine on their best day, and Hooper is no exception. While it might be a hefty gamble to place money on Hooper advancing from this stacked group, Cinderella stories have happened at the WSM before."

While Shaw ultimately made it to the Final after a tacky malfunction in the Stone-Off, it appeared that Shaw has weaknesses in his game despite being one of the all-time winningest strongmen ever — he is slow on his feet.

Shaw’s power and sheer strength remain intact, but his 400-plus-pound, six-foot, eight-inch frame at 40 years of age is tough to move with much agility, and it costs him time in events that require speed.

Given that four of the six events in Qualifying rewarded agility, it’s no wonder Shaw struggled. The Final events will likely be kinder to him, but the rest of the field should plan around Shaw needing to make moves in the heavier events rather than the Medleys and the like.

Swap Bishop and Kearney in the Stone-Off, and this was pretty much a spot-on prediction. The difference was ultimately a result of a blunder by Kearney in the Loading Race, where an implement fell off the platform, and he needed to reload it, which cost him precious time.

In a field this competitive, that kind of mistake is nearly insurmountable to recover from. 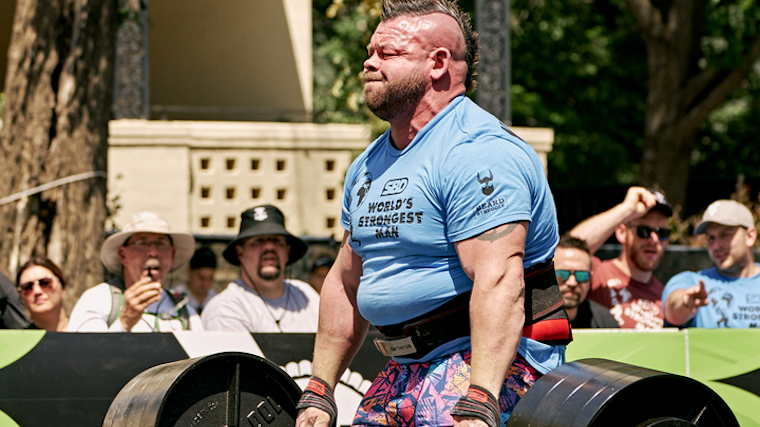 While it was impossible to predict Flowers getting injured in the Loading Race and withdrawing shortly after the Deadlift Ladder, this was otherwise a dead-on prediction overall.

As was the case with Flowers, foreseeing Singleton’s injury and subsequent withdrawal after the Loading Race was impossible. Even though he returned to competition on Day Two, he scored no points in the Deadlift Ladder as he was technically out of the competition. The idea that any athlete could get hurt in the first event, skip the second event, and then still somehow reach the Stone-Off is crazy.

Remove Singleton from the above list due to his early withdrawal and the prediction of Stoltman and Melsted reaching the Final holds.

All in all, there was information available to suggest that my Qualifying predictions could have been more accurate than they ended up. However, nailing 70 percent of the Final roster is still a decent showing. Let’s dive into the Final predictions.

Below are predictions for which athletes are likely to excel in each event, as well as a shot at what could be the overall ranking for the 2022 WSM competition. For reference, here is the 2022 WSM Final roster:

Going into the KNAACK Giant’s Medley, there are several standouts. After the Qualifying stage, it would be foolish to bet against Hooper in a speed-based challenge. I expect him to post an event-winning time.

Other athletes that will likely excel in this event are Novikov, both Stoltman brothers, and Licis. Aside from Hooper, Novikov might be the most proficient athlete in events that require both speed and a good deal of endurance. 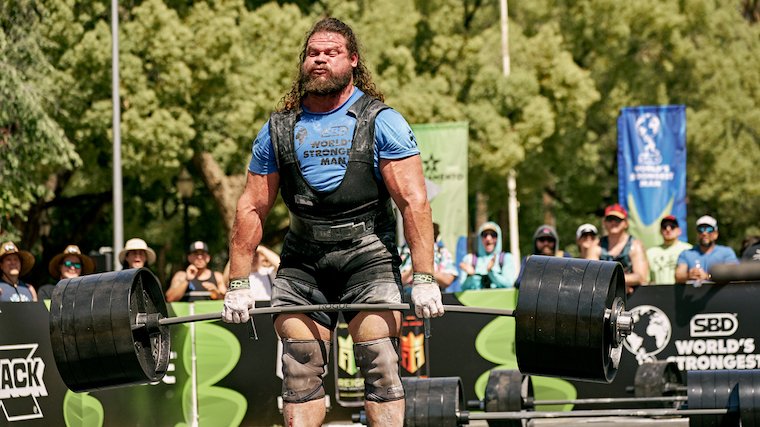 While I think Tom Stoltman will outpace his brother in this particular event, they have both put their prep on display in Qualifying, and they are both squarely in their element this week. Given their "grounded" position in the field of play thus far, I expect them to rank in the upper half of this event.

Licis, though, is in a unique spot. He’s won the 2021 Rogue Invitational and the 2022 Arnold Strongman Classic. He’s been seemingly unbeatable since his return to the sport, and aims to reclaim the WSM title that he (technically) never got a chance to defend after winning it in 2019 — he was absent from the 2020 and 2021 WSM contests due to injury.

During the qualifying stage, it became clear that Licis is hungry to win this contest. He has been extremely aggressive in every event, leaving nothing on the table. However, there have been several instances where that caused him to stumble. He had a mislift in the Deadlift Ladder and needed to execute an additional rep, and he stumbled early in the Car Walk.

Even though Licis is so good that he overcame those mistakes to post solid times that ultimately won him his group, those types of errors could cost him points in the Final. If he uses the rest day to recalibrate and avoid those potential mishaps, he should finish toward the top end of this event.

While the rest of the roster is very strong, speed is not their forte. Rhéaume, Mitchell, Shaw, and Melsted can move massive weight but aren’t as fast on their feet as the other five athletes. While I expect their times in this event to be world-class, I think they will finish in the bottom half of the event.

Boudreault is the outlier here. One thing seemed quite apparent in the qualifying stage — when the stakes are high, he shows up. With his back against the wall, Boudreault needed to pull out a big performance in the Wrecking Ball Hold and the Stone-Off, and, wow, did he ever.

If Boudreault can bring that same intensity to every event as he does when his competition life is on the line, he could very well leapfrog to the top of the leaderboard.

This event is where the heavier athletes will need to score points, and Shaw is the standout in that regard. In the deadlift event at the 2021 WSM Final, athletes pulled on 345 kilograms (760 pounds) for as many reps as possible in one minute. Mitchell won the event with 10 reps, Shaw finished second with nine reps, Tom Stoltman scored eight reps, Melsted hit seven reps, and Luke Stoltman managed six reps.

Assuming Mitchell has improved his deadlift since last year, it is a reasonable bet that he will win this event. Given the makeup of events in the Final, Shaw will likely need to finish in the top two of this event to make a run for the podium.

Licis, being one of the most well-rounded athletes in the Final, should also finish in the top half of the leaderboard. With the Deadlift event happening after the Giant’s Medley, athletes shouldn’t be too fatigued, and therefore the Stoltman brothers and Boudreault should put up decent numbers in this event as well.

Hooper performed exceptionally well in the Deadlift Ladder event, so he could pull out another surprise performance here. I’m putting some confidence behind that idea by ranking him ahead of heavy hitters like Licis, Novikov, and Boudreault.

The Flintstone Barbell event is a behind-the-neck press for max weight. In any overhead event, I’m not betting against Luke Stoltman, particularly when he is at his best. Shaw gets the nod for a second-place rank because he posted a 445-pound behind-the-neck press in training, and I expect that to be the upper limit of where more of these strongmen can go. 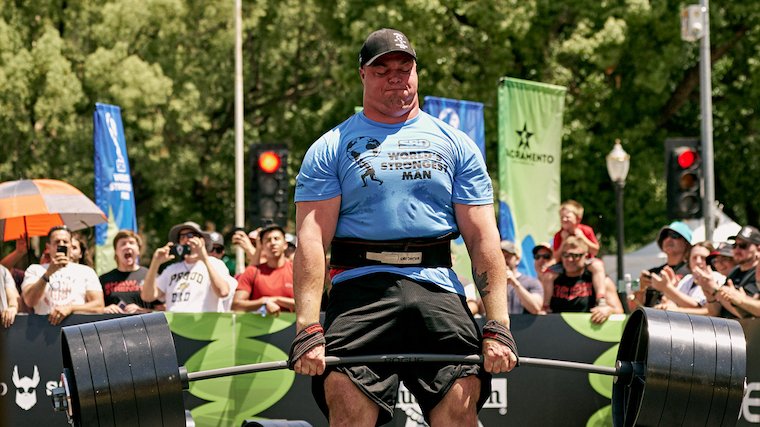 Licis rounds out the podium in this event because he has spectacular technique. His shoulder mobility will likely allow for a lot of additional weight that other strongmen won’t be able to manage. Boudreault is exceptional in overhead events, and it is safe to expect his strength to leverage a solid showing here.

Novikov and Hooper are the wildcards in this event. Both of them are strong and capable of executing some strong lifts, but it’s unclear if they will be able to go as heavy as two of the lighter athletes in the Final.

Tom Stoltman has the combination of size and speed that could leverage a winning time in the Bus Pull. This is likely where Shaw will need to make a big move to stay in contention for the podium. While Shaw has the size, he might not be quick enough on his feet to swiftly move across the finish line. 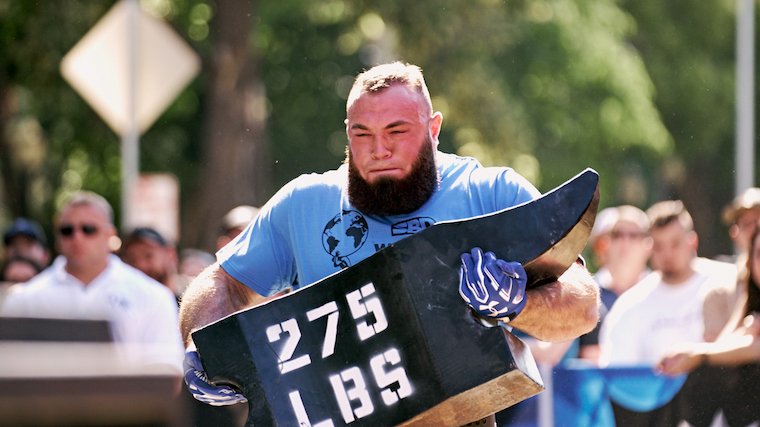 Novikov, Luke Stoltman, and Hooper are likely interchangeable with Boudreault. Still, Boudreault gets the nod here as his more compact physique will probably help him get the bus moving faster at the starting whistle. Licis pulling a runner-up finish is, primarily, a tip of the hat to his exceptional technique — he even has experience pulling "The Grave Digger" monster truck.

This event is where the stout and fast guys will excel. Novikov and Hooper are arguably the two most athletic guys in the Final, and duck-walking with a heavy anvil for time seems more in their wheelhouse. Tom Stoltman ranking fifth here could end up being a miss, as his height means that he will not have to lift the implement as high to get it up each stair, and he has more than enough speed under the hood.

Melsted having a shorter and stockier build will likely put him at a disadvantage. He will have to get the most hip extension with each lift, requiring more time to move between stairs.

The results of the Atlas Stones event at the WSM is usually not an accurate depiction of who performed best in the event, as athletes are aware of the standings and the specific times they need to beat to achieve a final rank.

Essentially, athletes go for broke here, and if they break, they don’t necessarily bother with attempting a recovery like they would if the Atlas Stones took place earlier in the competition.