The Final of the 2022 World’s Strongest Man (WSM) got underway on May 28, 2022, with the first three of six events that will ultimately determine the 2022 WSM champion. The day opened with the KNAACK Giant’s Medley won by Mitchell Hooper, who continues his awe-inspiring WSM debut.

The second event of the day was the Car Deadlift for reps, where 2020 WSM Oleksii Novikov showed he is not interested in leaving anything on the field. The last event was one of immense technique — the return of the Flintstone Barbell, which saw Novikov as the first winner of the event since Gary Taylor in 1995. Here are the results at the end of Day Four: 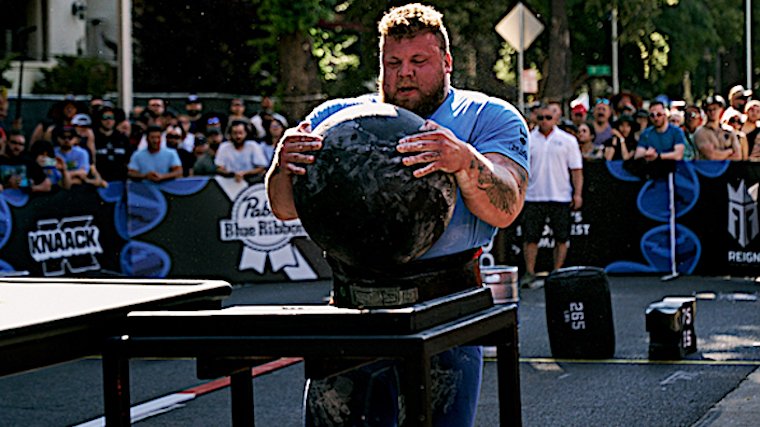 The 10 finalists were tasked to carry two KNAACK boxes filled with 125 kilograms (275.6 pounds) each halfway down the 20-meter course (back-and-forth twice) and then carry a 455-kilogram (1,000-pound) super yoke the rest of the way.

Hooper continued his miraculous WSM debut with his fourth event win of the competition, besting the reigning WSM champion Tom Stoltman in their heat. Novikov posted a fast time that seemed faster in person and Luke Stoltman continued his cool and collected approach with a respectable time to finish in the upper half of the leaderboard.

Several of the heavy hitters were not as smooth on the transition to the 1,000-pound yoke and therefore didn’t move it as quickly as initially anticipated. Licis, Shaw, Mitchell, and Boudreault hemorrhaged some points by losing valuable seconds.

There was a distinct advantage given to the athletes that lifted later in the lineup for the Car Deadlift as they knew the number of reps they had to beat. Although Mitchell took a commanding lead with 13 reps, Tom Stoltman knew it was the number to hit and matched it. Novikov blitzed past it with a super sharp technique that left no space for mistakes.

Likewise, while Hooper was unable to match Novikov’s mythical performance, he was capable of hitting 12 reps to tie Licis and Shaw. Hooper knowing that 12 was a threshold to match compelled him to grind extremely hard for his final rep. Boudreault competing earlier in the lineup may be a cumulative detriment for him in rep-based events as he is compelled to set the bar rather than eclipse it. 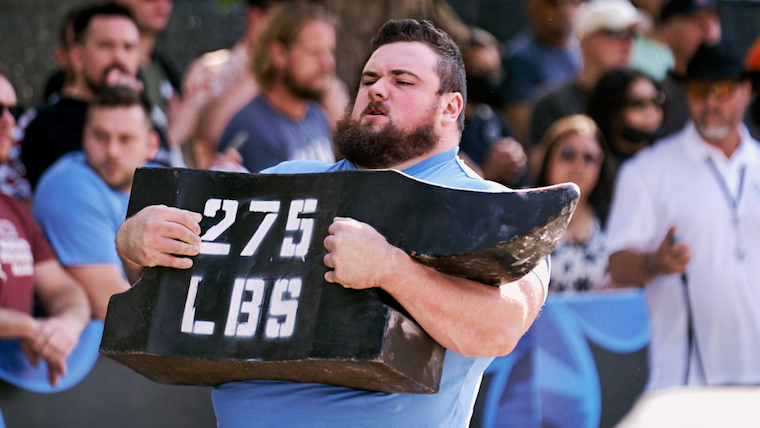 Unanticipated seventh and eighth rounds were added. The former was 240 kilograms (529 pounds), and the latter was 246 kilograms (542 pounds).

The story at the end of the Flintstone Barbell event was the immaculately sharp split-jerk technique employed by Novikov to smash the world record. Gary Taylor’s previous world record of 463 pounds that stood for 27 years was broken four times throughout the event — in order by Luke Stoltman, Licis, Tom Stoltman, and ultimately Novikov.

The final day of the 2022 WSM contest features three events: the Bus Pull, the Reign Total Body Fuel Power Stairs, and the Atlas Stones. Tom Stoltman is still very much in contention to potentially retain the WSM title with his signature event, the Atlas Stones, still to come — he would be the first strongman to win back-to-back titles since Shaw won his fourth in 2016.

It won’t be an easy path back to the crown for Stoltman as he sits 1.5 points behind Novikov. However, it appears to be a two-man race for the title heading into the final day as Licis sits 6.5 points behind Tom Stoltman.