The last day of the 2022 World’s Strongest Man (WSM) final got underway with the Bus Pull — the first of three events before a 2022 WSM champion is crowned. Each of the 10 finalists attempted to pull an 18.5-ton tour bus down a 30-meter course in the fastest time possible.

Coming into the event, the leaderboard told the story of a two-person race for the title between 2020 WSM champion Oleksii Novikov, who’s been inspiring all competition, and defending WSM champion Tom Stoltman, who’s thus far proved why he’s the reigning champ for a reason. Novikov emerged victorious in the Bus Pull. Here are the full results: 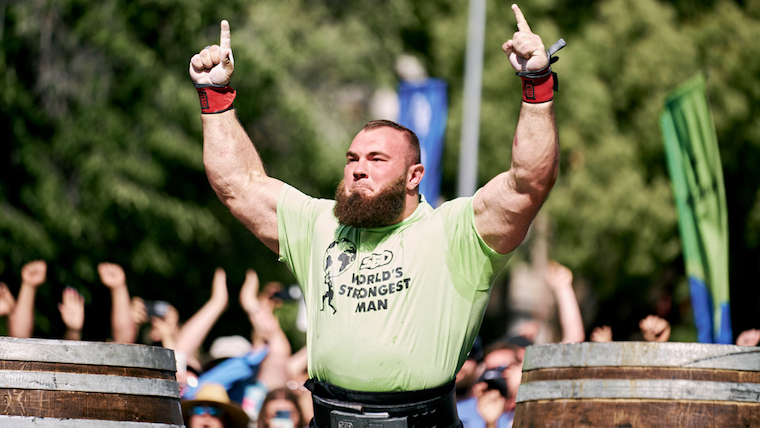 The course was marked in five-meter increments, suggesting that there was an expectation that not all of the strongmen would finish the course in the 75-second time cap.

The Train Pull event at the 2021 WSM contest was littered with sabotage — the brakes locked, among other issues, and the strongmen couldn’t move it. It eventually turned into a Train Push to keep the competition moving. The crew made sure that the bus would move for the athletes and the event encountered no technical issues.

Melsted was eliminated from the Flintstone Barbell event first and therefore was first in the turn order to pull the gigantic tour bus. The terrain was the flat asphalt road that wrapped around the Capitol Mall lawn. Melsted’s run opened clean, and he held a steady pace down all 30 meters to score a time of 51.32 seconds.

Rhéaume was up next. He and Melsted were at the bottom of the leaderboard without a path to the podium with only three events left, but Rhéaume still entered the stage as though his contest life was on the line.

A huge forward swing by Rhéaume on the rope and his run was underway. Fast feet brought him a time of 53.22 seconds.

Hooper was third to the floor on the sunny, 61-degree, windless morning. It was Hooper’s first time performing a vehicle pull in his young strongman career. His technique to get early momentum was much more theatrical than the two men who went before him, and he struggled to keep the rope taught toward the end of his run. Still, he knocked out a time of 49.24 seconds to take the lead.

Luke Stoltman was fourth on the stage, sitting in the middle of the leaderboard. His form was tight and parallel to the ground. His head stayed aligned to his spine through his run, and it wasn’t until the very end that he had to pull-up slightly for air. He logged a time of 47 seconds. He needed assistance walking off the course but was not injured.

Boudreault took the fifth heat of the event. He entered with 11.5 points and would need a flawless day combined with his opponents’ falters to reach the podium for the second straight year.

Boudreault built momentum quickly, and his exhales could be heard throughout the course. The bus was humming along and crossed the finish line at 47.2 seconds.

Shaw entered the stage next. Anything less than an event win would likely spell the end of his hopes for a record-tying fifth WSM title. Lumbering steps got the bus moving quickly, and Shaw took advantage of his size to convert a time of 44.69 seconds.

Mitchell hooked up to the bus as the crowd cheered him on.

Mitchell seemed to get off to a slow start but made up for it once the wheels moved. He never let up until the whistle blew and logged a time of 45.72 seconds.

The 2019 WSM champ polarized the crowd as he received some boos from the crowd, which were drowned out by chants of his name. A robust and forward tilt got his run moving. His man-bun bobbled on his head as he scorched the course in 42.18 seconds to take the lead and celebrated with a few seconds in an oxygen mask.

The reigning WSM champion Tom Stoltman latched in, took a deep breath, and hunkered down, awaiting the starting whistle. As the second-largest athlete in the field, there were expectations of a fast time. Unlike his competition, Stoltman eye’d the finish line the entire time rather than keep his head down. He logged a time of 44.5 seconds.

Novikov was last to the floor after scoring 28 of a possible 30 points on the first day of the Final. He knew the time to beat was Licis’ 42.18 seconds. Novikov’s technique positioned him closer to the ground than any other strongman. At the end of his run, he lost hold of the rope but still clocked an event-winning time of 41.51 seconds. 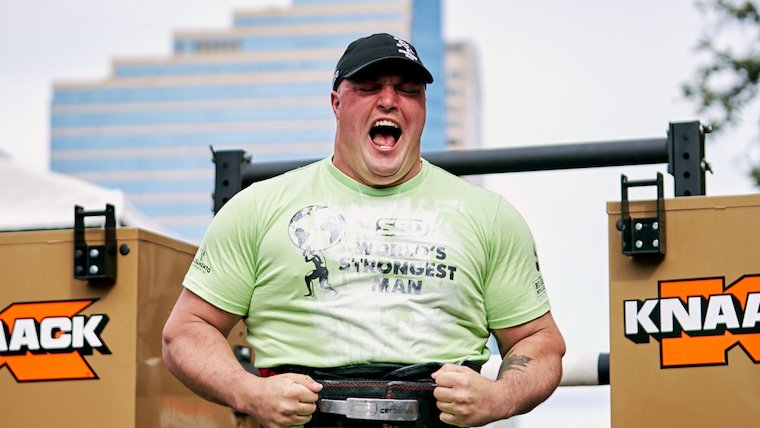 There are two events left for athletes to maneuver on the leaderboard before the competition comes to a close. The Reign Total Body Fuel Power Stairs are up first at 11:00 a.m. PST, followed by the Atlas Stones at 2:00 p.m. PST.